Being spoiled for choice of river venues as a member of the YDAA, I've decided to explore them this season (my second full year on the York book). Last week's session on the Derwent trotting with the centrepin was fun, but my legs hurt after a whole day standing up (most of my left leg is held together with metal after a very bad car crash in France 15yrs ago). So I decided to have a go on the river Nidd yesterday, and fish a pellet on the bomb for whatever would snaffle it up: the prospect of sitting still and watching a tip was appealing with my creaky old leg!

I had no idea if it would be busy at Skip Bridge, but I only saw one other angler the whole day, and he was on the Leeds side of the river (I did watch a mink scurry along the far bank and then swim underwater to my side a little way downriver). After I'd set up my rod in the car park, I chose a stretch of river and fed a handful of swims with the idea that I'd lazily make my way through them all before heading home for tea. It was so peaceful and the surroundings so beautiful that any fish would be a bonus.

When I arrived at my last swim at about 1pm I hadn't had a fish, but I was pretty content. I was feeling quietly confident in this last swim though- there was a stretch of faster water that was zipping through between some quite dense foliage to my right (I should have taken a picture, sorry) and there was no access to the water downstream for 20-30 metres. Gently lobbing the bait out into the current, I positioned the rod and then perched on my unhooking mat (as of yesterday evening, and thanks to @rd115 I shall be more comfortably poised in future!)

Sitting there all content, I silently prayed (as is my habit), 'Lord, this is beautiful. Thank you. I'm loving this, fish or no fish.'

Five minutes later, my semi-trance was broken with the rod doing something I'd never seen it do before; it seemed to wobble all over, as though it had electricity running down it. For some reason I immediately thought of something I heard John Wilson say, that when you touch-ledger, there is a funny sandpapery sensation when a barbel is examining your bait. 'Hmm,' I thought, 'perhaps this is...' and then the tip slowly went round, strike, and the feeling of sheer power somewhere down in the murky depths.

A few minutes later, punctuated by some heart-in-mouth lunges, the usual paranoia, and the occasional fear that whatever this was it was stuck to the river bed, a beautiful barbel slipped over the net and an emotionally spent angler plonked down on the bank (another 'Thanks, Lord!') No, not a monster, but my first ever river barbel (and a PB at that) on my first ever trip to the Nidd 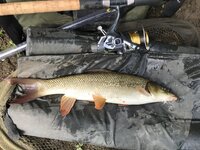 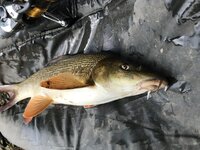 To be honest, I could have packed up and gone home straight as soon as I released her, but something told me to carry on for a while. Sadly, mummy or daddy barbel didn't put in an appearance, but I did have a lovely visit from a very plump Mr. Chub and another PB at close to 3lb 4oz 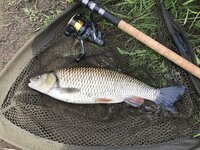 So there it is, early season joys and river fishing in Yorkshire is alive and well! Who knows how long I'll be made to wait for a second golden beauty, but the memory of this first one will linger long in my heart and mind.
T

You never forget your first barbel (river or otherwise)........Well angled....

That's great to read! Very well done. May it be the first of many.

Zerkalo said:
That's great to read! Very well done. May it be the first of many.
Click to expand...

What an enjoyable day. Hope you have many more.

Nicely done . I had my first ever river barbel from the Teme on the 17th, it's a great feeling to have finally achieved it isn't it .

WickerDave said:
Nicely done . I had my first ever river barbel from the Teme on the 17th, it's a great feeling to have finally achieved it isn't it .
Click to expand...

It really is! A similar feeling to my first pike earlier in the year. Now for their bigger brothers and sisters Dave

S
The Arun and Adur. Everything gets worse...