With support from Mark Derry and Nathan Hughes. 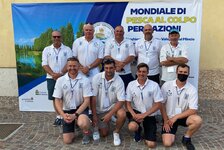 
After much toing and froing, we finally made the decision to go to this year’s World Championships in Italy.

In Italy we are considered ‘Elite Athletes’, giving us an exemption from the 5-day quarantine due to competing in an international event. All proceeded with their pre-travel tests and passenger locator details, giving us a smooth passage to Italy with no border problems whatsoever.

Generally, we all had:

The river was up to 6m deep, clear, and quite pacey. We all realised very quickly that this was going to be a tough one. The two main species were scardola, a small roach/rudd type species, and chub. 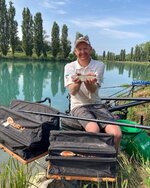 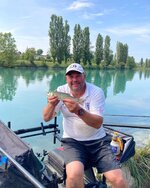 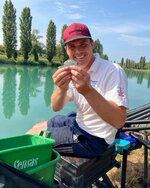 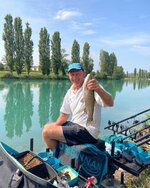 Preparation was extensive. However, the ‘boxes’ we were allocated for the 5 days of practice were soon found to be the worst we could have got. Post-match results confirmed this. As a result, we caught very little during our practise week, but, with great on the bank feedback from assistants Darran Bickerton (Coach), Nathan Hughes and Mark Derry, we soon learnt we had to consider a multitude of methods. Our long post-practice team meetings began to put together some form of plan – a plan that had to be flexible due to the nature of the pegs. 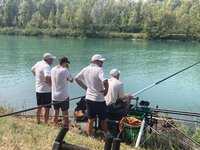 On Day 1 we all put 5 Litres of GB in at the start on our selected long line (needed to find a decent ‘run’ maybe 11.5m – 13m. Into this we put 100ml Casters, 50ml Dead Maggots, 50ml Floating Caster and 100ml Joker. This was ‘balled’ with hard balls to slowly release the particles inside. On top of this bait, we pottered 2 or 3 balls of our Sticky Maggot and Stones mix. We also fed a few balls of Sticky Mag on our Slider Line.

We started quite well; Cam had drawn end peg A23 … but as we all knew upstream end pegs were not great as you did not benefit from anglers’ feed above. His 9th place was a great result. Matt Godfrey worked both Pole lines for a 6th and Sean, at the wrong end of his section, caught well after changing from a running rig to a 3g Flattie to catch better quality scardola for 9th. Steve and Will both worked hard for their fish for mid-section placings.

Despite being disappointed with our 48 points for the first day, it emphasised how tough the venue was as we finished 4th – a full 21pts behind Italy. 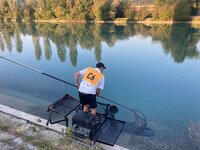 Day 2 saw the same tactics, but this time we removed joker from our initial mix. We were convinced it brought too many smaller Scardola into the peg but agreed that introducing it later in the match may be important to kick-start the peg.

On paper, we had a reasonable draw. Cam was in a great area and went on to win his section with a fantastic 4k weight. 2 hours into the event we were flying! I reckoned we had a 4, 4, 1, 7, 6 points tally, and I knew Italy was really struggling with at least 3 anglers in the bottom 5. Sadly, all of that changed as big fish began to make a play. Italy shot past us and a brilliant performance from the Czechs meant they just pipped us at the post. 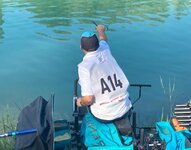 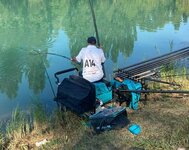 Will and Steve both lost valuable fish; Will, a 5-point chub at the net, and Steve two 6oz perch from his inside line. However, Matt fished a blinder, ringing the changes to come home 3rd in his 23-peg section and an incredible 5th overall placing.

Our 41 points saw us sneak home in a bronze medal place. 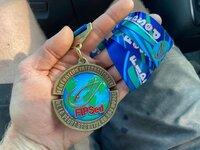 All in all, it was a fantastic week from an 11th-hour decision to go. Helped by great funding from the AT and a brilliantly motivated group, all played a part in securing us a podium placing.

The 4 young guns, Matt, Matt, Cam, and Rory really held their own during the week and despite Matt Derry and Rory not fishing at the weekend they will have gained a huge amount of experience.

Thank you all for your support on social media, it didn’t go unnoticed.