Hey Drowners hope you all are well and good. 3 weeks ago I was down at my grandmas and grandads for 2 weeks and I managed to sneak a few days fishing in. The venue of those 3 days was Head Fen Fishery. It has 4 lakes, a snake lake, a 1.5 acre small carp water with fish to just over 20lb, and a small match lake. There’s also a small reservoir but that’s only accessible if you intend to stay in the cabins next to the reservoir. There’s reportedly fish to 40lb in there however not confirmed to my knowledge. Enough of my waffling and more catch report .

The first day we rocked up only to find ourselves blocked by a gate which you needed a code for. God knows how long we would’ve been sat there for if a 4x4 didn’t turn up and let us in. We then booked ourselves onto the 1.5 acre lake, intent on catching a variety of species. However after an hour and a half with no action at all, we walked over to the snake lake. The complex is quite lenient, allowing you to go between lakes if fishing is tough on one. The only thing that you can’t do bait wise is use floating pellets, which was unfortunate because all 3 days the fish were mostly on the surface. Anyway after moving to the snake lake, I set up in a pan with a large Lilly bed to my right and a channel connecting all sides of the lake in front of me. I chose to fish just out of the pads since the wind was picking up and I didn’t want to battle the wind to try and get the rig to the far margin. Around 15 minutes later the float ducked under and I was in to my first fish in a new place which turned out to be a F1 at about a pound. The next fish to come to my net was another F1 of a similar stamp. Then about 30 minutes later, the float bombed under and I was into a carp, until it went through the entire Reed bed, snagging me up. However walking to my left a bit I managed to win the tug of war and the fish came free, only to go back into the pads. This time I tried to prod the fish with my net and that worked and the fish again came out and charged around in open water for another 5 minutes. Finally the fish came to the net and I was rewarded with a long lean 6lb common.After that commotion, the swim went eerily quiet with only one more small F1 falling to the net. Unfortunately, that fish was the last and we packed up around 4.

Day 2 was a session on the small match lake, which I assumed would be fairly easy. How wrong could I have been? Over 5 hours I landed 2 fish, one being an F1 about about a pound, and the other a common of around 11lb, a contender for my PB. Again, the wind was strong and there was a large storm brewing to my west but thankfully missed me by about 4-5 miles. The day started off with an unexpected green woodpecker sighting, along with multiple European goldfinches. As I began setting up, I knew something was missing. Me being stupid as usual, had forgotten my landing net handle at my grandmas, so off she went to go fetch it. Then things got even worse, as I was setting up I came across a big issue with 2 factors. I couldn’t form a loop . Factor 1 was the strong wind blowing into my face making the loop move every second. And the second factor was that I was so cack-handed when I did manage to get the loop round, the end would only go through one end of the line so it always came apart straight after. This annoyed me a little but was to be short lived as my grandma came back and was able to help me. The swim was inviting, with a broken tree stump to my left, a nice margin to my right, and a far margin with over hanging trees. I started off as close as I could get to the far margin within a few inches of it, and slowly started throwing in small handfuls of bait and recasting every 5 minutes. 20 minutes or so later, the float ducked under, then shot up and I thought it was a tench, because of the lifting bite but before I knew it the fish came off. Who knows what could’ve been on the end? The next bite came about an hour later as a pound and a half F1 came to the net. After a bit more waiting I switched to the margin on my right which I had been slowly trickling in the bait. Sure enough, 10 minutes later the float shot under the surface and I was in to a very angry carp. The fight lasted about 5 minutes, with the fish making multiple runs to the Lilly pads across from me. Thankfully, it came to the net, and I was rewarded with a big golden, bronze coloured common. 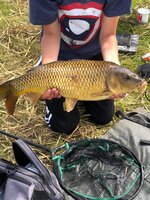 Annoyingly, it had completely butchered my rig, and I spent about 30 minutes fiddling with the knot, and at that point I think I had made it worse. By then my grandma was wanting to leave, so that finished day 2. 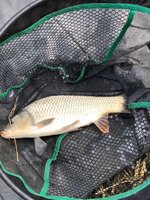 Day 3 saw a return to the snake lake, on one of the points. The set up was the same as all the other days, 13ft Shimano Aero X1 float rod paired with an Inertia 320 with 5lb line. Bait wise was 2 mm pellets with a 6mm orange bandum on the hook, but later changed to a standard 6mm mainline pellet to match the ones I was feeding.

The day started off with me casting to far with a plummet and getting it right into the far bank. Thankfully I could make my way around, and I freed the rig a few minutes later. At the margins and and far bank it was around 2 ft, and in the middle about 3 and a half to 4 ft. I started off in the margins, and I think that was a very good decision, as about 20 minutes later, the float sank under and I was into a fish. This fish was particularly strong, and took me around the entire point, but thankfully my little Inertia handled it just fine, and after a few last chance takes towards the reeds, I landed a very large common. This fish was a lot bigger than the other from a few days ago, but was more long and less fat. Unfortunately, it was very hard to get a picture, and the few that were taken were when the fish was flopping all over the mat so it’s hard to put in perspective of how big it was. We estimated the common to be of around 12lb and a new PB! The action slowed rather fast after that, with a few small commons falling here and there. That’s until a savage take caught me completely off guard and the fish surged off to the far margin. I got it out but it then went all the way around the point and snagged me in the reeds, even with nearly maximum drag. The fish was actually a lot smaller than I’m describing it as, but nearing double figures for sure. The next notable capture was a gorgeous mirror with a very unique scale pattern. Weirdly I cannot upload a picture because it’s too big to upload… just picture it as a small 1lb mirror with mini banana shape scales in a linear format with a starburst pattern on its tail. The last notable fish of the day was a 7lb common, which put up a very good fight. The swim picture is here but imagine a peg behind this one 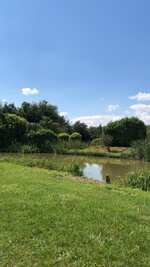 We packed up about 15 minutes later.


If you read the entire thing, thank you, it means a lot to me. Although there was one issue on day 3. I was in the middle on precise depth, and I had a problem where when I would strike, the fish would shoot of which is normal but because it was running I couldn’t bring my rod upwards enough, and eventually it would either fall off or snap the hooklink. Any ideas on what I’m doing wrong?

Again if you read the entire thing, it means a lot and this took me over an hour to write

Head Fen is my local fishery if you are up this way again and want some advice let me know, there are some tactics that work really well there.

Not what I hoped for, but good sport

T
Tench From A Fen Drain