After all the rain we have had I decided to risk another trip down to the 12 arches. Ive fished here 3 or 4 times before and at best caught a couple of small roach. I'd seen plenty of bream sunbathing and heard tales about Ivan Marks and suchlike in the 70's, but I'd not really seen many people fishing here myself.
On previous visits the water has been clear like an aquarium, so when I arrived to see that it had a nice brown tinge with about 18" of visibility I was pretty pleased. There was also a nice ripple on the water. My optimism was slightly tempered due to the face that I hadn't rolled up on the bank until 9.30 and the sun was starting to put in an appearance.

I fished a light shimano technium quiver tip rod, its not really made for chucking feeders around, but it has a brilliant soft action to stop the bream from bumping off. 4lb mainline and a 3lb hooklength with a size 16 hook. I used a 30g Drennan cage feeder which held bottom with ease, even though there was some color, there was still virtually no flow.

I used a few random leftover half bags of groundbait, but in amongst it all was some micro pellets, green Swimstim and some black Sensas lake. I put a pinch of chopped worm in each feeder full as well as some castors.

After casting around to find a clear-ish spot I did 7 feeder-fulls to start with before baiting up. First cast on double red maggot and I didn't have a bite, so switched to a whole worm that had been top and tailed. This was in the water for about a minute when the tip nodded and then pulled right round. It was a bit hairy on relatively light gear, so I was pleased to get this bream in the net. I would guess it weighed about 5lb.

The next cast and the same thing happened.

I had 4 bream in the first hour with three of a similar size and a smaller one of 21/2 lb. At about 11am, just as I was talking to a polish fella I had another bite which was coming in similar to the others, however when it got half way across the river it started pulling back and I had to backwind it right back across the river. I was sure it was a foul hooked bream, but when I got it over to my bank for the second time my Polish friend started shouting "CARP CARP" I couldn't believe it, but I had hooked a common carp of about 6lb. After a few more runs I managed to net it. Unfortunately at this point my phone battery died [!]
After the carp I struggled for 30 mins or so, probably because it had ploughed right through my shoal, but about 11.30am I started getting bites from the bream again and caught another 5 between then and 1.30pm. At this point I bumped one right in the area of the shoal. It went slow again after this and I had run out of worm so I decided to pack up at 2pm.
I just managed to tease enough life out of my phone for a shot of the net before it died again. You can just see the carp on the right. Unfortunately the bream are all lieing on top of each other, but there are 9 in there!
Total bag weight must have been 50lb or thereabouts. The best day Ive ever had on the Soar and I doubt I'll manage to do it again.

Nice catch mate,some cracking bream along that stretch, nice to see a pic of some of them[8D]
P

Thanks lads, still buzzing from it. Possibly the catch of a lifetime from there!

Part of me thinks I shouldn't go back as I'm not going to catch as well as that again from there, but at the same time I'd like another of those carp!
O

go back dan, some big shoals of bream roam that stretch, below the weir live some big carp, first place i was taught to fish, i remember my dad picking me up from working his night shift getting a mirror of 24lb on a new potato[]
fished a few evening matches on the straights & someone would nearly always hook a carp
B

Taking Oggys advice Ive been back a couple of times since. I've not done as well as the first time, but Ive managed a few fish after work.

My best evening was last night. I fished from 6.30-9.00pm. Chopped worm through a cage feeder. It was quite bright with no ripple.
The first hour resulted in a couple of chunky perch. These were quite welcome as I thought they'd all been eaten!

At about 8pm the bream started rolling over my feed and I had 3 in the last hour. 2 that were probably pushing 2lb and a larger one that I weighed at 5lb 4oz. This was the stamp of fish that I caught on my first visit.

There were plenty of bream rolling, but I only caught these three. There were clearly a lot more fish in my swim, but I couldn't get bites from them. I'm not sure if I should have fished a longer hooklink so the midwater fish had a chance of intercepting on the way down, or if I should have upped the feed to drag them down onto the bottom.....Hmmm..... 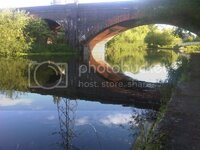 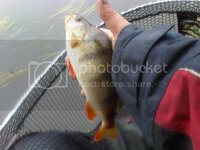 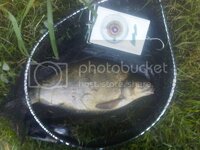 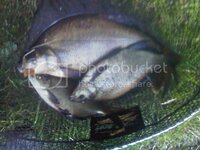