A repair package of works up to £10 million has been proposed for the Lower River Aire washlands that were affected by devastating floods. 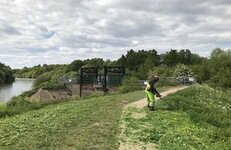 Since the flooding in February, Environment Agency staff have inspected and maintained 130km of river banks and identified more than 40 locations on the lower River Aire that require repair work due to the damage caused during last autumn and winter. The repair works are needed to return the flood defences back to their pre-flood condition.
Temporary repairs have already been made to those defences requiring the most urgent attention, including the washland reservoir embankments known as Poor Bank and Pickhill Bank between Heck, Gowdall and the Snaith washlands. Washlands are areas of land adjacent to rivers which are designed to store water at times when the river levels are high.
Teams have also been working within Government guidelines to clear away flood debris along the Lower River Aire over the last month and have started their regular programme of grass cutting of flood defence banks to enable inspection and maintain their condition.
Kimberley MacPherson, West Yorkshire Operations Manager at the Environment Agency said:

Recovering from flooding is always incredibly hard and the coronavirus pandemic has added to this greatly. We are doing all we can within Government restrictions to keep up the maintenance programme of our flood banks and we’re pleased to be starting this crucial repair programme of works to get the defences back to their pre-flood condition.

We’ll continue to work closely with flood wardens, community groups and residents to provide support as best as we can during the coronavirus pandemic.
Click to expand...

The flooding on the lower River Aire at the end of February followed an autumn and winter of exceptional rainfall that had fully saturated the ground and kept river levels high for prolonged periods. It was the wettest February on record for Yorkshire, with the River Aire catchment receiving 367% of the average monthly rainfall.
River levels responded very quickly and the volume of water in the river was such that the washlands filled to capacity and overtopped, to an extent not experienced in recent times.
There are 14 formal washlands on the Lower River Aire which have a capacity of 45 million cubic metres, equivalent to a sixth of the volume of Lake Windermere or 18,000 Olympic sized swimming pools.
The Environment Agency worked with its partners Selby District Council, East Riding of Yorkshire Council, North Yorkshire County Council, the emergency services and the Internal Drainage Board to minimise the impact of the flooding through the operation of its existing and temporary flood defences and the use of 32 mobile pumps.
Despite these efforts, unfortunately over 100 properties were flooded and many more affected in the communities of Hirst Courtney, Snaith and East Cowick. Many landowners and farmers along the Lower River Aire, and road and travel routes between communities were also impacted.

The Environment Agency is still working on a full internal review to understand the causes and extent of the flooding, including how the washlands worked, the flood warnings and the effectiveness of the pumping operation once the washlands overtopped. The Environment Agency is also working with the local authorities as part of their investigations, and working on our own internal reviews to better understand the causes of flooding and any learning.
Although options to further reduce flood risk are limited by the tidal influence from the River Ouse, the Environment Agency will be working with partners and local communities to explore what may be possible.

While the package of 40 repair jobs won’t increase the standard of flood protection for communities, there are planned investments for the next six years along the lower River Aire to improve and replace some of the existing flood defences, at a total projected cost of £36 million. These plans are all subject to approvals and will require partnership funding to deliver.

My mate in Snaith will be happy to see that Dave. ?

Angling Trust says no to damning the River Severn