M
Hi guys, I know you lot are a mine of information and have great fishing hacks and thought it might be worth having a post listing a few gems you’ve discovered over time.

I was tying rigs a few weeks back and cleaning the writing off the winders with Cif and a scourer when I decided to give it a try experimenting with other household products.

I always use a black sharpie pen to write on the winders and remembered that hairspray will remove ballpoint pen marks from fabric before using a mild detergent, so decided to give it a try on the winders using a tissue and it came off within a few seconds. As I went onto clean about 80 winders it saved me a great deal of time.

I’m sure you guys have other hacks that you have come across that you might be happy to share…..

Feel free to add any favourite or decent winter pics 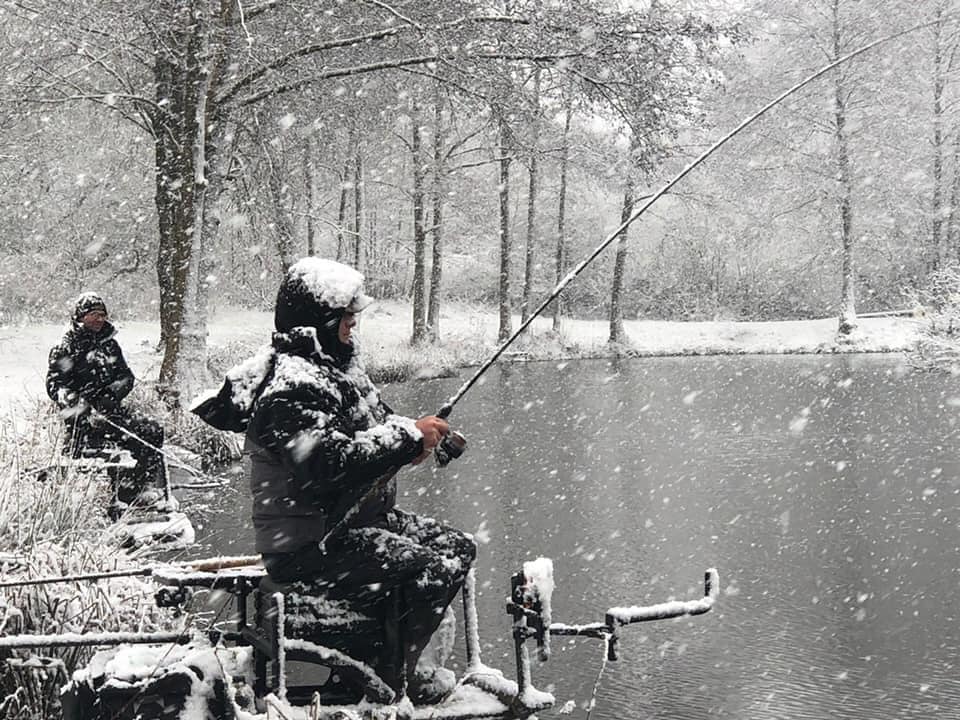 Your absolute #1 bit of knowledge for fishing?

I have one that I hold at the very top of my regard above all else -
I was out last night testing some new tekkerz (trotting jigs for Trout on BFS) on the river and something happened that brought it to the forefront of my mind...

I'd seen no signs of a bite what-so-ever, doubt had began to set in - but it just so happened that during a gap in the clouds, the sun illuminated below the surface and I could see clearly to around 2 meters out, I was reeling in from trot and was thrilled to see that I was chased in by a massive angry Trout - too late to stop and try to get the bite, he'd already turned by the time that thought process clicked - but none the less I went from the dull and depressing feeling of enduring a blank, to excitement and enthusiasm.

As an angler who's not content with the tried and tested, I get excited and inspired by trying different ways of doing things when it comes to fishing - as a result I've had A LOT OF BLANKS, so so many, and I think this is why mine is -

It doesn't have to come from fish, it can come from anything - and in varying degrees, a different shot pattern, a different float, setting off out to the bank with a new landing new handle, a bigger/smaller bait, a change in wind/weather, moving/changing swims, getting the line out of the water and thinking/observing, having learned from some new youtube videos/a forum post the night before, whatever...

But, for me personally when fishing - the most important thing I've learned to do is always trying to maintain a good level of confidence in what I'm doing, everything I do is focused on building up just another little notch of it, it's so big for the way I like to fish - that I think if I didn't have this in the locker then I wouldn't even be fishing anymore, or I'd be sat behind a waggler on stillwater fishing maggots on size 18's (there's absolutely nothing wrong with that, I'm just saying it's not my thing - therefore, I wouldn't be doing my thing / I'd be defeated).

Fishing is all about knowledge / tricks / lessons / personal rules / experience - what's the #1 thing that you hold above all else?

What's the worst part about fishing for you?

Firstly, packing up at the end of the session. By thst point I just want to get home (usually to forget the day, but sometimes to celebrate!). Having to tackle down the vast quantity of gear I need seems to take forever.

Don't get me wrong. I know I could travel lighter. When I was a teen I used to fly fish for trout along with my granda. I was usually fishing before he got to the bank, and packing up took about 2 minutes.

Yesterday, id realised when at the venue that Id managed to leave part of my shuttle behind. On getting to the peg which turned out to be over uneven, angled ground - I took my box first and managed everything else in 2 trips.

On the way back I stupidly tried to get the trolley to work, until I hit a slope and everything tipped over. I then needed 5 trips to the car to get everything in.. Not far, but I was totally wiped out.

Secondly is the clearing up after fishing. Washing out Bait boxes, groundbait bowls etc. Id gladly pay someone else to do it! 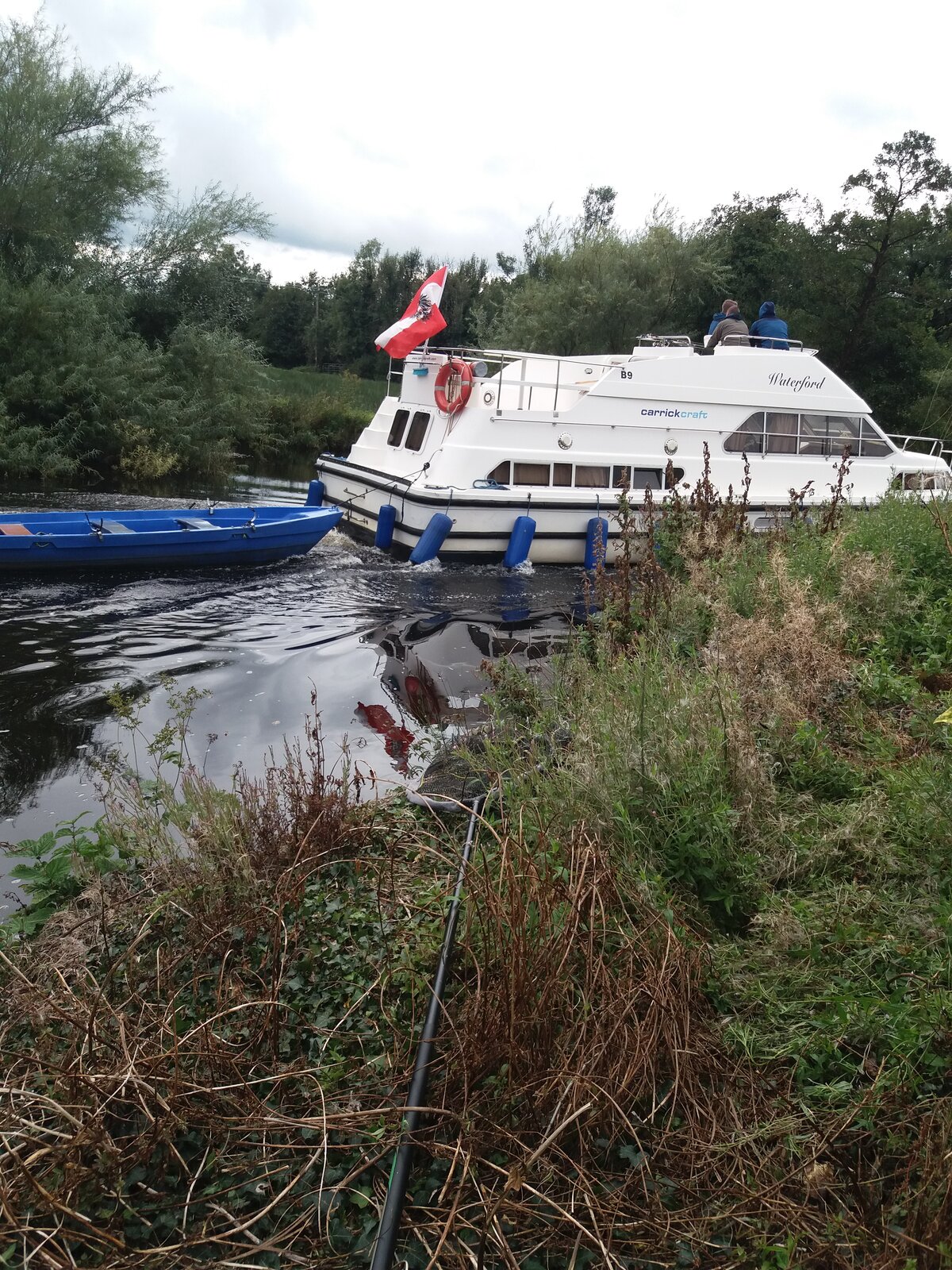 Passing boat traffic, and does it affect bites?
I'm coming round to the opinion that it doesn't make any difference. I used to be told that it takes five to ten minutes after a boat had passed for the fish to re-settle. Well this summer I've spent a lot of time on a narrow but deep river, with cruisers passing all the time, but bites seemed to continue as normal. The cruiser in the picture is the average size that I see, but there are some that wouldn't look out of place moored up somewhere in Monaco. In many cases my tip still shot round or dropped back even when the vessel was directly over my rig.

Might make a difference when float fishing, mind you. 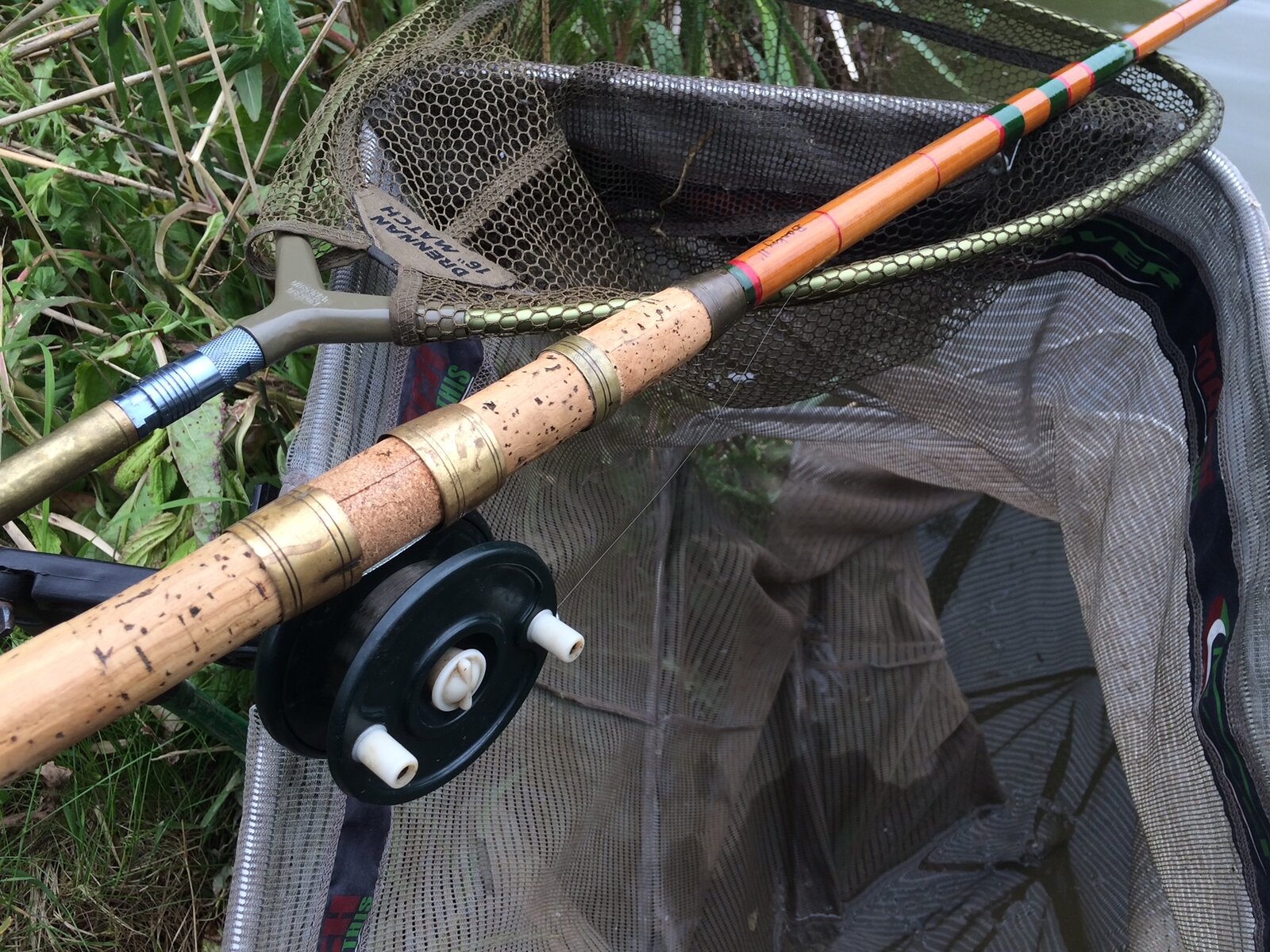 I was catching a few roach using a little 3" Paramore centrepin, when an old chap came by and commented on my tiny reel.

"I think I can beat that" he said.
And returned a couple of minutes later with a real beast of a 'pin - 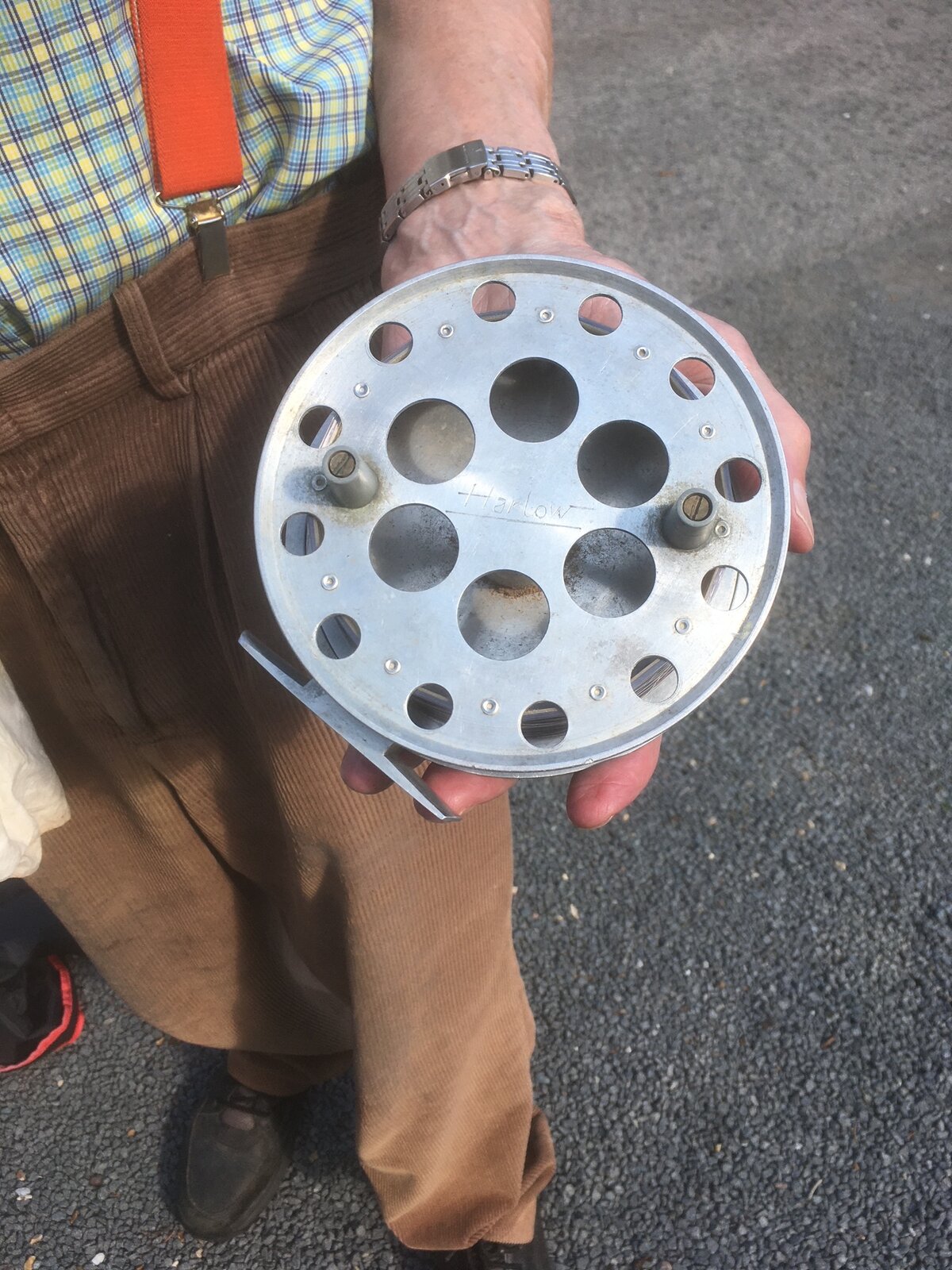 Six inches in diameter, it spins like a dream.
It bears the name 'Harlow', but he knew nothing more about it.
A bit of digging revealed that the reel was sold by the fishing tackle shop Harlows, but like quite a few reels of the period, probably made by one of the rolls Royce engineers during his lunch break - or when he wasn't being watched.
Basically a big copy of the Renauld and Stanton reels, it was heavy, too heavy to trot with all day.

But I think I'd rather have his braces.